This is part 6 of a weekly interactive story, links to earlier parts can be found below:

Part 1: A beginning is a very (very) delicate time
Part 2: Up for the craic at dawn.
Part 3: You can’t make an omelette without a violent uprising against the eggs.
Part 4: This revolution will definitely be televised
Part 5: Lactose, meet intolerance

The most popular choice for continuing the story was:

Duck into starbucks on your way to work, buy a strawberry milkshake and if the sinister SUV makes an attempt to intercept you, fling the drink at it to attract attention and create a bit more revolutionary web content.

Like so much that has happened throughout your life, in your head this was going to be a much slicker operation: A quick detour through Starbucks, to emerge with a cool milk beverage/sticky strawberry hand grenade – and then continue down the road, seemingly unaffected by crippling paranoia.

You’ve now been in the queue for fifteen minutes. Every single customer ahead of you seems to be either:

a) Passive aggressive consumer rights activists with multiple dietary requirements.
b) Sickly looking work experience kids making a terrible job of buying a huge coffee order.
or,
c) Men, who despite being old enough to know better, are attempting to chat up the staff in the most cringe inducing manner possible.

Each time you think about giving it a miss, the queue shuffles forward just far enough to tip the sunk-cost time calculation in your head marginally in the direction of sticking with it.

You are about four people away from getting served, some geezer is just telling the nonplussed barista about how he really prefers Coldplay’s “early edgier stuff”, while he orders: “my usual please, Svetlana”.

Heroically restraining your gag reflex, you notice that the scary SUV that was tailing you has now pulled up and parked right outside. Your heart rate kicks up a notch as the queue shuffles forward again.

As the next customer is winding up towards a wanting-to-speak-to-the-manager moment due to the fact that there aren’t any gluten free cranberry flapjacks left, three very scary looking and virtually identical men get out of the Range Rover and enter the coffee shop. You can now hear your heartbeat over the mid-tempo jazzy background music and your mouth is drier than a Jacobs Cracker on the moon.

One of the men hangs back by the door, another sits at a table by the window, the third joins the back of the queue. They look rather like the agents from The Matrix, except that they have spent a lot more time lifting weights. They even have the little wires snaking from their collar to unseen earpieces. Each of them glare at you with the kind of deep scorn you haven’t seen since that time you went to try and do the park run.

So, you are now surrounded by a squad of trained killer government goons, all of whom look very keen to take you for a car ride somewhere with a bag over your head. You can’t see any way to feasibly make some sort of escape.

You are in a lot of trouble here and you don’t see how it could get any worse. Then a floaty, jazzy cover version of Anarchy in the UK comes floating out of the coffee shop speakers and you realise that, of course, things can always get worse.

“Ohmygodohmygodohmygod!” An excited yelp drags you out of your spiralling terror panic. Svetlana and her colleagues are squealing in excitement. “It’s you hahaha, it’s you,” a tall nordic looking geezer in a Starbucks polo almost shrieks. They are all looking at you, pointing and laughing. “You are zat  ‘Brreeng down ze governmient’, No?” beams Svetlana. Before you can say anything someone else in the queue has whipped out their phone and is studying your now infamous drunk selfie tweet for confirmation: “Wow yeah, look”. A ripple of interest is rapidly swelling to a wave of excitement as phones come out and people start snapping selfies and pictures of your gormless looking face.

A small group of what would (still) describe themselves as ‘Yummie Mummies’, start a chant of “Milo, Miloooo” to the tune of what sounds like the Go Compare advert.

The three government spooks don’t like the look of this at all, they collectively decide to get hold of you as quickly as possible. The one in the queue is slowly barging through the thickening crowd, the other two circle closer, one is pressing his finger to his ear, maybe getting instructions.

You’ve got maybe twenty seconds before they’ll have you – you instinctively reach out and grab the nearest heavy looking object from the counter. It’s a half full bottle of hazelnut coffee syrup. What good that is going to do you don’t know, but you need to think of something quick.

(So far you have bought down 0.03% of the government. No change from last time)

What are you going to do? 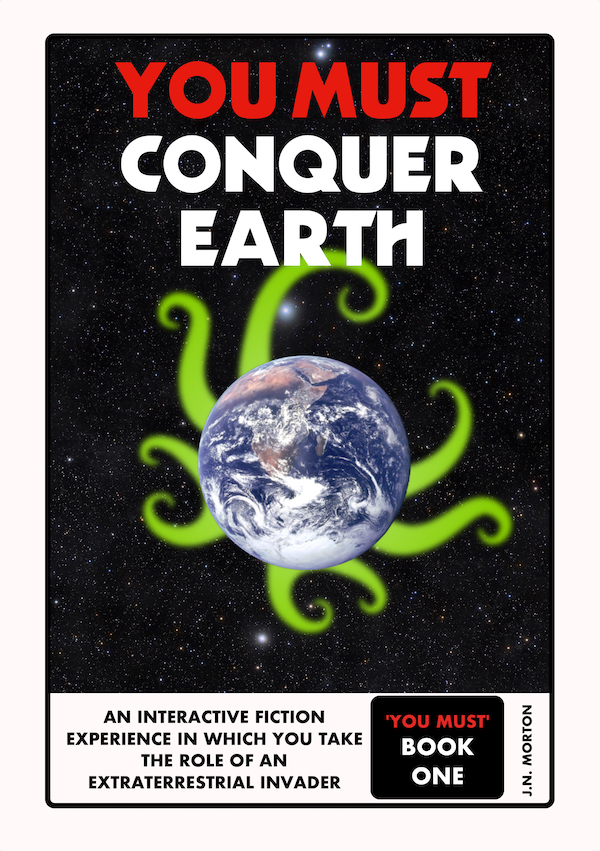 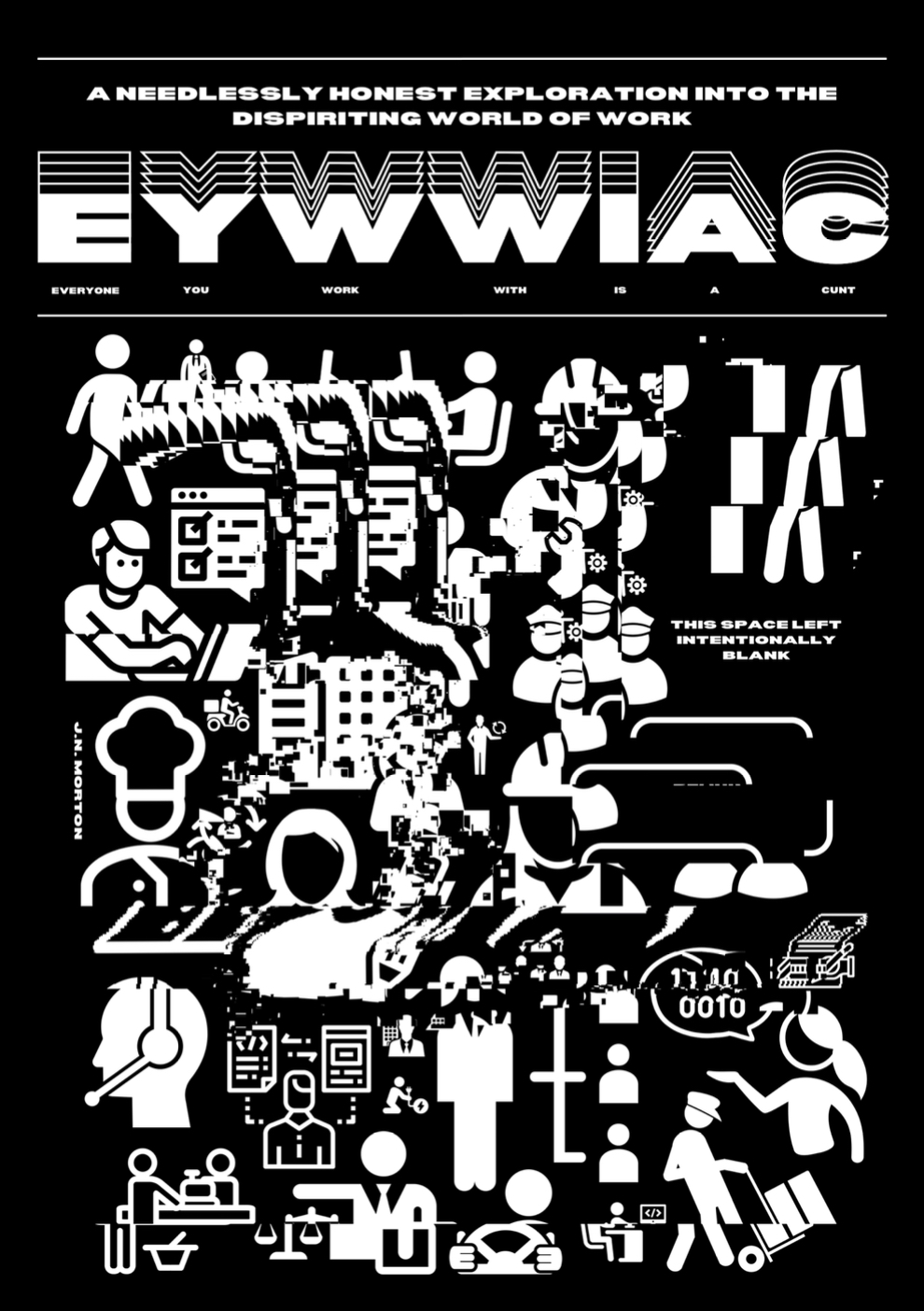 More ticketed events soon
You heard it here first
New print by @mr_bingstagram adorning the highly analogue west wall of the bunker.
A very special opportunity to buy two books I’ve written, with absolutely no additional benefits. Other than knowing I may be able to keep the lights on for another 5 minutes. #indiebooks #indiepublishing #comedybooks #interactivefiction #careersuccess #everyoneyouworkwithisacunt #swearing #scifibooks #chooseyourownadventure
Champion-eeeee
An actual short film I once made has now been reissued in the form of a sign. The sign version is quite possibly better.
Very much enjoying the existential office dread of the Stanley Parable Ultra Deluxe
%d bloggers like this: